For me the JAX in Mainz is the most important Java developer conference in germany and it grows from year to year. 11 years ago I attended my first JAX in a small Hotel and this year its in Mainz on 3 levels for 5 days with a great program for newbies or experienced developers.

And here is the mobile Conference APP for BlackBerry Devices (OS 6 or OS 7), of course BBM enabled. Download from BlackBerry AppWorld.

If you’re coming from outside of germany, please load the conference app from home, because there’s a SQLite preconfigured included to avoid high costs of data-roaming or waiting endless times to download inside a slow conference WLAN.

The app is similar to my previous developed conference apps – more screenshots can be found here.

The roomplan this year is large:

inside the app you can find this complete roomplan scaled down to device side – if clicking on the scaled image you can scroll through the plan to see the details.

for each session there’s an extra roomplan for this room: a scaled plan from the level where the room is located, per ex:

You can click on the plan and scroll through the image. The room is always marked with a smiley

have fun and see you in Mainz. More details about the app can bve found here.

The 2012 Spring Edition of Conference2Go gives you Conference Apps for EclipseCon 2012 USA and MobileTechCon 2012 in Munich.

Unfortunately both conferences happen the same week. I’m attending MobileTechCon, but developed my free conference app for both events:

Screenshots and more informations can be found here.

Screenshots and more informations can be found here.

Soon after the first App from Conference2Go series the next one is available.

This time it’s the conference app for german W-JAX 2011 conference in munich:

Screenshots and some documentation can be found here.

The App can be downloaded from AppWorld – here’s the download link.

the first version of a BlackBerry Java APP supporting Eclipse conferences was provided for EclipseConEurope 2011 in Ludwigsburg: 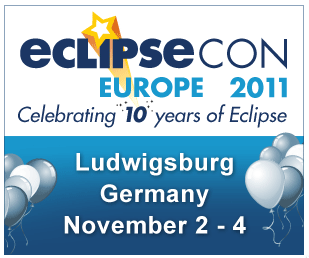 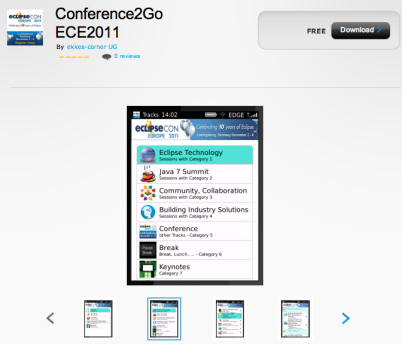 This App can be downloaded from BlackBerry AppWorld.

Screenshots and some documentation can be found here.